This page focuses on the process of getting source SQL Server data into the storage of the Delphix Virtualization Engine (DVE) via the Staging Target Host.

We listed the four primary components of the Delphix logical architecture for SQL Server above. In addition, a fifth component in the Delphix logical architecture might be considered for use-cases #3, #4, and #5 in the Technical Overview below: a Connector host.  The function of the Delphix Connector on that host is the discovery of the source environment via remote registry and ODBC calls.  There are no Delphix software installation requirements for Windows source hosts, but it might be helpful to note this role can co-reside directly on the Windows source host for consolidation purposes if desired.

Keep in mind that the Delphix Engine is always syncing with backups of the source database. It is never the live data that is ingested; it is always backups of different flavors.

Delphix can ingest database and log data from native backups, as well as a number of third-party backup products. SQL Server restores the backups onto the shared Delphix storage on the staging target host running the databases in recovery mode. We call this process “validated sync,” which is why you may hear the staging target also referred to as a validated sync server.

It is important to note that the Delphix Virtualization Engine (based on DxOS, itself derived from a UNIX-based OS) is not a domain member itself. The credentials we discuss in this document are between Windows servers, and the key domain-specific authentication is between the staging host and the UNC path to the SMB share where the backup data is stored.

In the rest of this section, we will describe multiple scenarios. Review them to determine which will fit best in your environment.

In this example, the staging target host exists in the non-production TEST domain, but because of domain trust, accounts located in that domain can access resources in the PRODUCTION domain. This would allow the staging target host to connect to the PRODUCTION source host both for environment discovery and to the shared backup location “\\source\backups” over Server Messaging Block (SMB) to access database and transaction log backups. 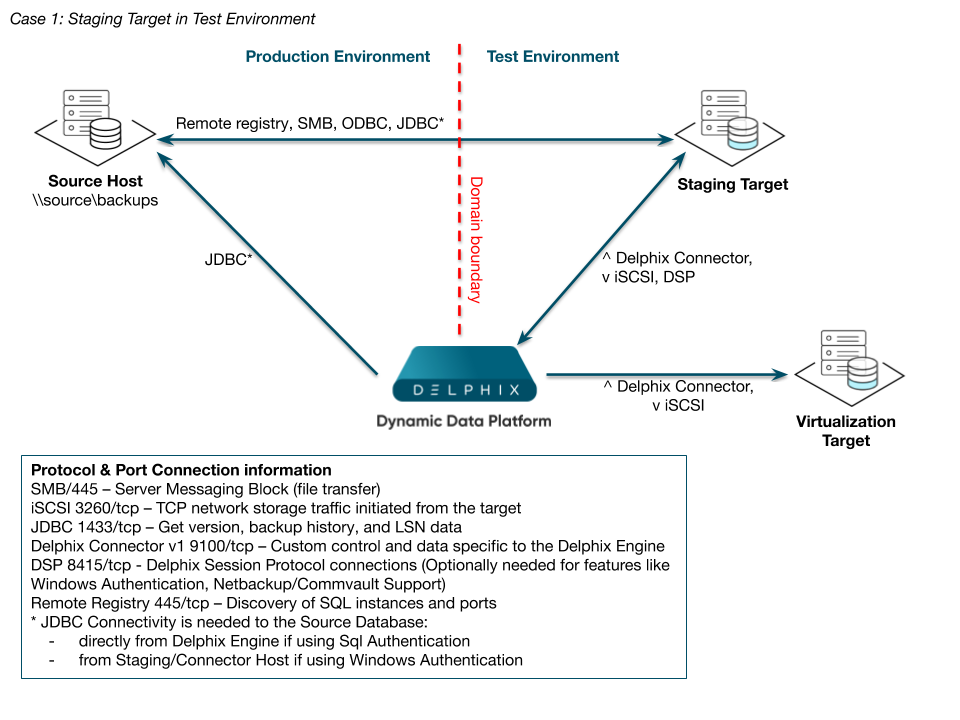 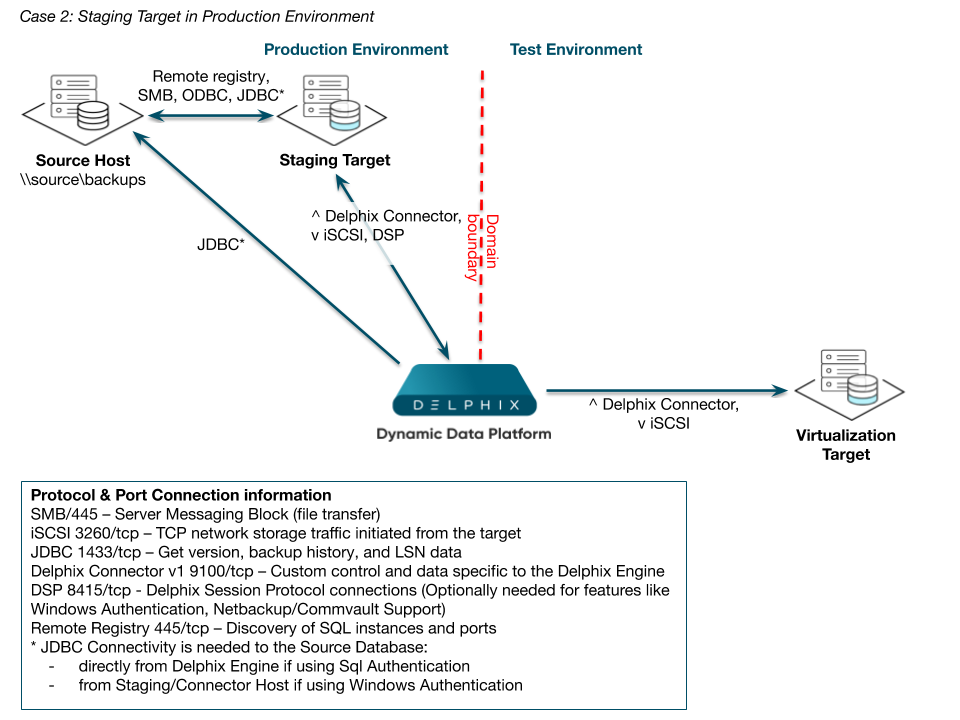 This is shown by the Domain-agnostic Storage diagram below by the arrow – stretching from bottom-left toward the upper-right and crossing the domain boundary – representing any UNC-compatible protocol connecting the staging target host to the data on the NAS host. Provided that the Delphix environment users on both the source host and staging target host have read/write access to the shared backup location on network-attached storage (NAS), the SQL Server instance running on the staging target host will be able to access the backup files needed. 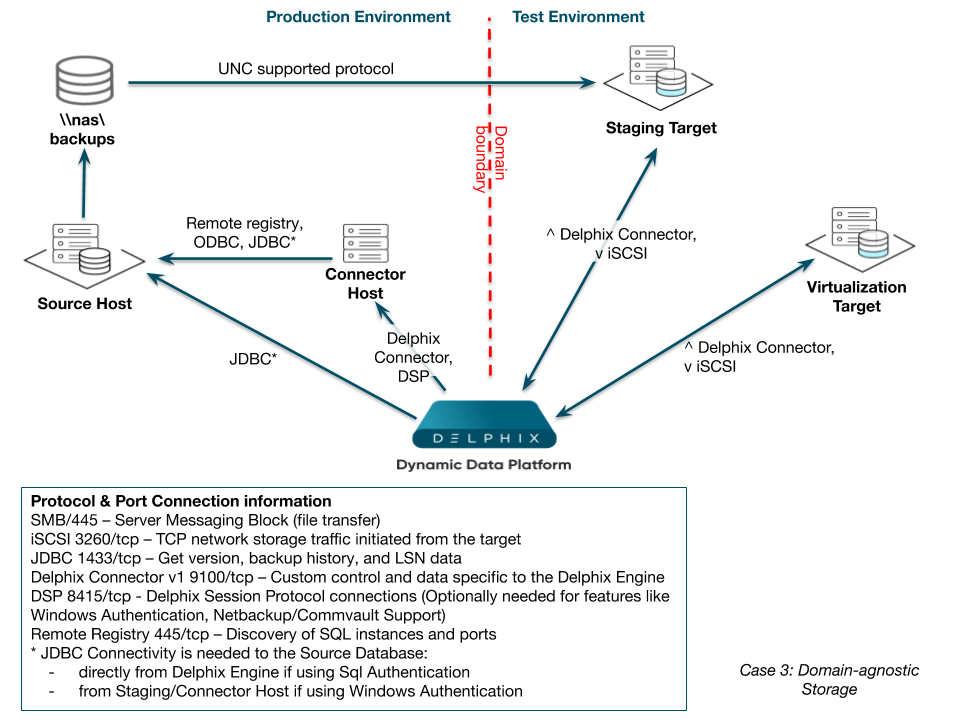 In this somewhat more complex configuration, backup files are sent to storage in the PRODUCTION domain, while the host used to link to the source and perform the validated sync is in an isolated TEST domain. We have used a separate connector host in the PRODUCTION domain again, to perform the environment discovery of the source host there. Backup files for SOURCE are being stored on NAS.

We have customers who also use this model in cases with multiple data centers (on-premise deployments) or virtual private clouds (cloud deployments) rather than multiple domains. These customers want database and transaction log backups to be available in secondary data centers or private clouds, but they want to make sure that the data is only copied over the WAN once. 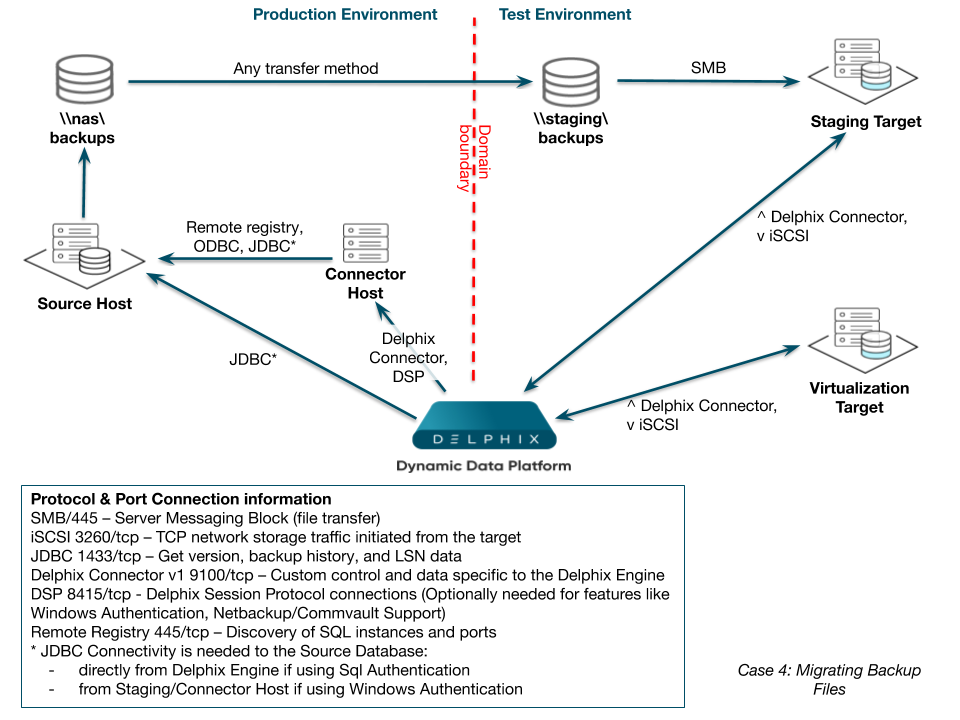 Windows provides an “Everyone” group. However, this group still only applies to accounts that can be authenticated in the domain, so you cannot use that group in this case. There is still a way to configure access to the shared backup location on \\source\backups by accounts in other domains, such as TEST. However, because it relies on anonymous access, you will need to consider the security implications of enabling this method, as well as measures that could mitigate any additional risk in your environment – for example, a private VLAN or IPSEC between hosts. 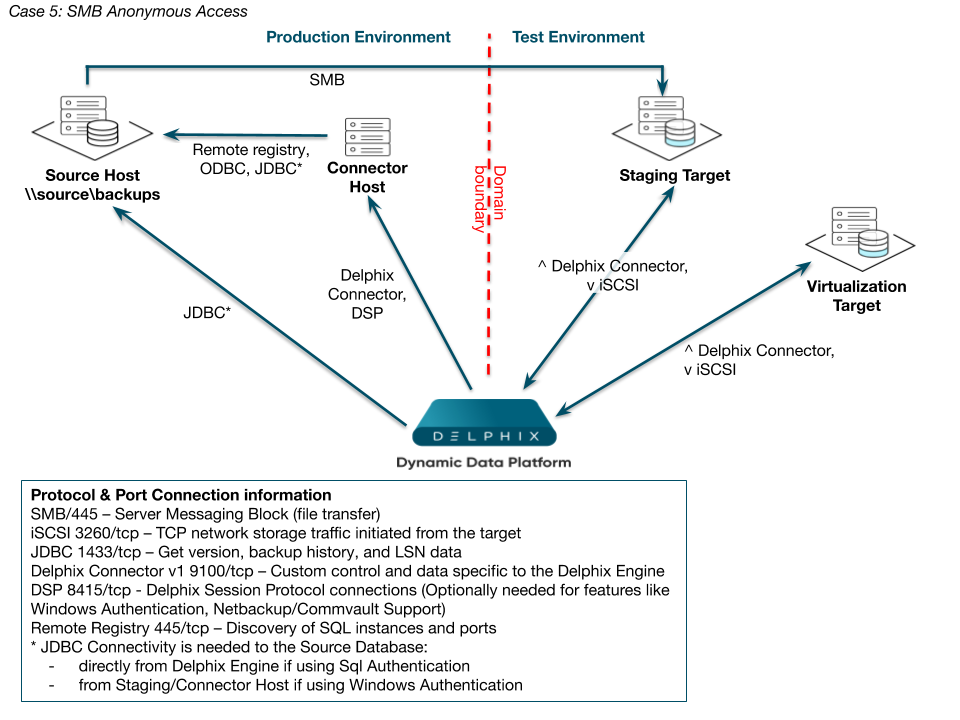