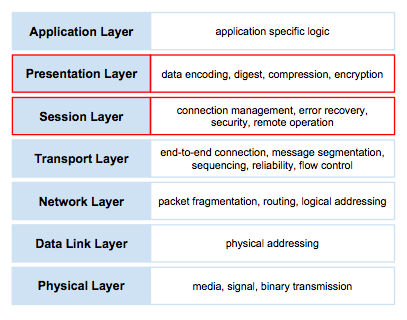 DSP supports the request-reply pattern for communication between two networked peers. In contrast to the traditional remote procedure call (RPC) models, which focus exclusively on low level details such as data encoding and wire framing, DSP implements a generic session layer that supports a number of advanced functionalities desired for network communication, including:

An exchange refers to an application defined protocol data unit which may be a request or a response. DSP supports the request-response pattern for communication. For each request sent, there is a corresponding response which describes the result of the execution. An application protocol is made up of a set of exchanges.

A nexus (a.k.a., session) refers to a logical conduit between the client and server application. In contrast, a transport connection (a.k.a., connection) refers to a “physical” link. A nexus has a separate naming scheme from the connection, which allows it to be uniquely and persistently identified independent of the physical infrastructure. A nexus has a different lifecycle than the connection. It is first established over a leading connection. After it comes into existence, new connections may be added and existing ones removed. It must have at least one connection to remain operational but may live on even after all connections are lost. Nexus lifecycle management actions, such as create, recover, and destroy, are always initiated by the client with the server remaining passive.

A nexus has dual channels, namely, the fore channel and the back channel. The fore channel is used for requests initiated from the client to the server; and the back channel from the server to the client. From a request execution perspective, the nexus is full duplex and the channels are functionally identical, modulo the operational parameters that may be negotiated independently for each channel. A channel supports a number of features for request processing, such as ordered delivery, concurrent execution, remote cancellation, exactly-once semantics, and throughput throttling.

A service refers to a contract that consists of all exchanges (both the requests and the corresponding responses) defined in an application protocol. Given the full duplex nature of request execution in DSP, part of the service is fulfilled by the server and the remaining by the client, where the client and server are from the nexus management perspective.

As a network protocol, DSP is designed with security in mind from the onset. It supports strong authentication as well as data encryption. It follows a session based authentication model which requires each connection to authenticate before it is allowed to join the session. Authentication is performed using the Simple Authentication and Security Layer (SASL) framework, a standard based pluggable security framework. The currently supported SASL mechanisms include DIGEST-MD5, PLAIN with TLS, CRAM, and ANONYMOUS. Optionally, TLS encryption may be negotiated between the client and the server for data privacy.

DSP offers a number of features to enable the support for high performance network applications. For example, it allows multiple requests to be exchanged in both directions simultaneously, which provides effective pipelining of data transfer to minimize the impact of network latency while ensuring the total ordering at the same time. It supports trunking that can effectively aggregate the throughput across multiple connections, which is crucial for long fat network (LFN) and 10GigE. It also provides optional compression support which boosts performance over bandwidth limited network. We have observed, through both internal benchmarking and in customer environment, DSP based applications delivering multi GigE in an ideal environment and getting a performance boost of as much as x10 in bandwidth limited settings.

DSP provides detailed information and statistics at the session level. The information may be used to examine the state of the session as well as diagnose performance problems. It is currently exposed via an internal support tool called jmxtool.

Replication is the first feature to take advantage of DSP. It has been rebuilt on top of DSP and shipping in the field since 3.1. In the latest release, a number of host based applications, such as SnapSync, V2P, and Delphix connector, use DSP as well.