Introduction and Use Cases

Your organization may have more than one masking engine, and in certain circumstances it may want to coordinate the operation of those engines. There are two specific scenarios in which an organization will want to have some level of interaction and orchestration between multiple masking engines:

For both of these use cases, you will need to be able to move various objects between masking engines. These objects may include the following:

You can move a subset of these objects between engines using the Masking V5 APIs.

See the following sections for instructions.

Using an SDLC process often requires setting up multiple masking engines, each for a different part of the cycle (Development, QA, Production).

For many organizations, the size of the profiling and masking workloads requires more than one production masking engine or the data sources are in different administrative/geographic areas making multiple engines more appropriate. These masking engines can be identical in configuration or be partially equivalent depending on the organization's needs.

Syncable objects are external representations of objects within the Delphix Masking Engine that can be exported from one engine and imported into another. The Delphix Masking Engine supports the concept of EngineSync, which is the ability to coordinate the use of masking algorithms across multiple Delphix Engines. EngineSync currently supports exporting a subset of algorithms and the encryption key as syncable objects.

Revision hashes are generated randomly when objects are created and are preserved when an object is exported from one engine and imported to another. Therefore if two objects have the same revision hash, the objects are identical, however it is possible that two independently created objects could have different revision hashes but otherwise be identical.

For example, it is possible to manually create secure lookup algorithms on two engines that behave identically (assuming the engines already have the same encryption key) but since they were created independently and not synchronized, their revision hashes may be different.

The export document is exported as an opaque blob. Do not edit it outside of the Delphix Masking Engine.

This endpoint lists all objects in an engine that are syncable and can be exported. Any object which can be exported, can be imported into another engine. The endpoint has no parameters. Each object is listed with its revision hash.

This endpoint allows you to export one or more objects in batch fashion. This endpoint returns an export document and a set of metadata that describes what was exported. You are expected to specify which objects to export by copying their object identifiers from the output of the  /syncable-objects endpoint.

The endpoint has a single optional header, a passphrase. If you provide the passphrase, the export document will be encrypted using it.

If an error occurs while exporting one or more elements in the export document, the entire export will abort.

This endpoint allows you to import a document exported from another engine. The result of import is a list of objects that were imported and whether the import was successful.

The endpoint has one required parameter, force_overwrite, and an optional HTTP header, passphrase, which if provided, the engine will attempt to decrypt the document using the specified passphrase. The required force_overwrite parameter dictates how to deal with conflicting objects.

Note that only one import operation can be in progress at a time. When an import is in progress, both calls to the export endpoint and attempts to use the "Generate New Encryption Key" feature will fail. Wait until the import is complete to perform those operations. 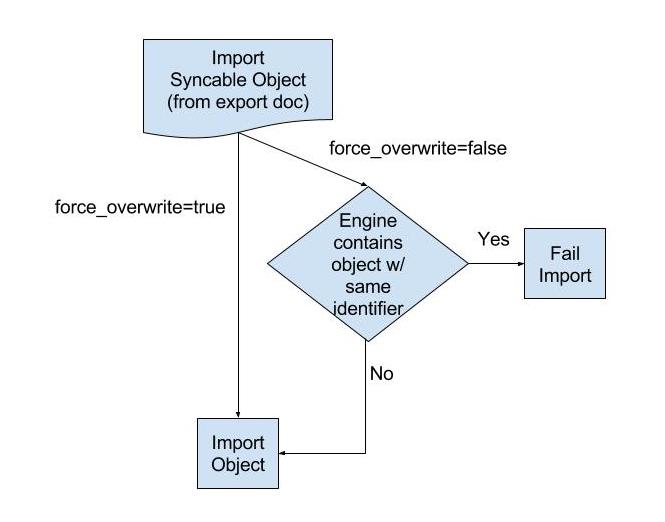 The engine will import one object at time. If there is an error importing an object, the import process will abort. However, any objects that were imported before the error are left as-is. For example, say you are importing objects A, B, and C. Import successfully imports A. During the import of B, the engine encounters an error. Import will report that A was successfully imported, B failed to import, and C was skipped.

Attempting to Import an Existing Object

During the import of an object, the Delphix Masking Engine checks for the existence of the same object contents. If the engine and the document being imported contain the same content, a result of SUCCESS will be returned without repeating the work of a full import. For example, re-encrypting an engine can be very time consuming, and this should not be repeated if the encryption keys already match. If the object content matches and the Delphix Masking Engine skips the full import, it will be noted in the application log.

Below is an example log statement when an identical encryption key was imported:

One important piece of data used by many masking algorithms is a shared encryption key. This key is used to encrypt data that is stored in the application repository within the masking engine. It is also used by most of  the masking algorithms, such as secure lookup algorithms. Changing the key changes the output of these algorithms. For example, if the FIRST NAME algorithm masked “Joe” to “Matt,” changing the key might cause it to mask “Joe” to “George”. This allows each masking engine to have unique masking algorithm output. A user with Administrator privileges can change the key by clicking the Generate New Key button in the Admin tab.

Other actions are not allowed during the key generation process. Wait for the Generate New Key process to complete and a success dialogue to display in the user interface before performing additional actions on the Delphix Masking Engine such as running a masking job. 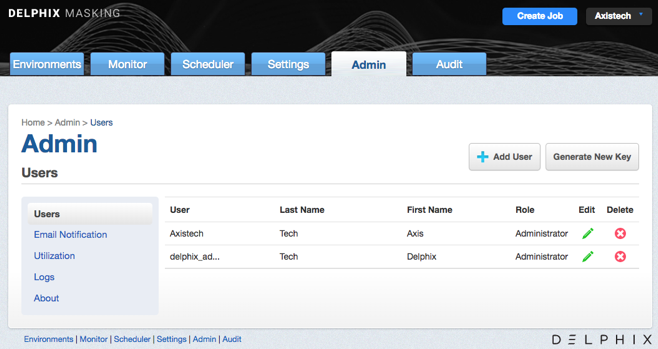 In order for an algorithm to behave the same way across several engines, all of those engines must have the same key. Changing an engine’s key alters the behavior of all of the algorithms on that engine that use the key.

When an algorithm that requires the encryption key is exported, the export payload will include the key from that engine. When that payload is then imported into another engine, if the importing engine is not already using the key in the payload, its key will be changed. Therefore, it is best to synchronize the keys of all engines at deployment time.

You may want to change the key from time to time as a security management practice. If so, change it on all of the engines at the same time. That is, generate a new key on one engine, export that key, and import it to all of the other engines in the deployment.

Keys can be imported and exported independently of algorithms. To export the key from an engine, login to the engine through the login endpoint and then call export with the body shown below. Like all objects, you can encrypt the payload by supplying a passphrase header.

The API will return a JSON payload containing an encoded form of the key that you can install on other engines through the import endpoint. Like all exported objects, it is encoded in an opaque blob.

Algorithm synchronization provides a general and flexible way to move masking algorithms between engines. It is recommended that algorithms move in only one direction. That is, algorithms should be exported from one engine and imported into others but should not go in the other direction. This recommendation is primarily to simplify management of the engines and keeping track of what algorithms exist on which engines.

For the reasons described in the Key Management section above, the first step to deploying any multi-engine configuration should be to synchronize the key among all of the engines involved. This reduces concerns about unexpected key changes causing algorithm masking results to change.

Two example architectures are described below. Note that the two architectures could be combined by having multiple production engines instead of a single one.

The first architecture aims to address the problem of horizontal scale -- that is, achieving consistent masking across a large data estate by deploying multiple masking engines. In this architecture, algorithms are authored on one engine, labeled “Control Masking Engine” in the diagram below. Those algorithms are then distributed to “Compute Masking Engines” using the algorithm synchronization APIs. The synchronized algorithms will produce the same masked output on all of the engines, thus enabling large data estates to be masked consistently. 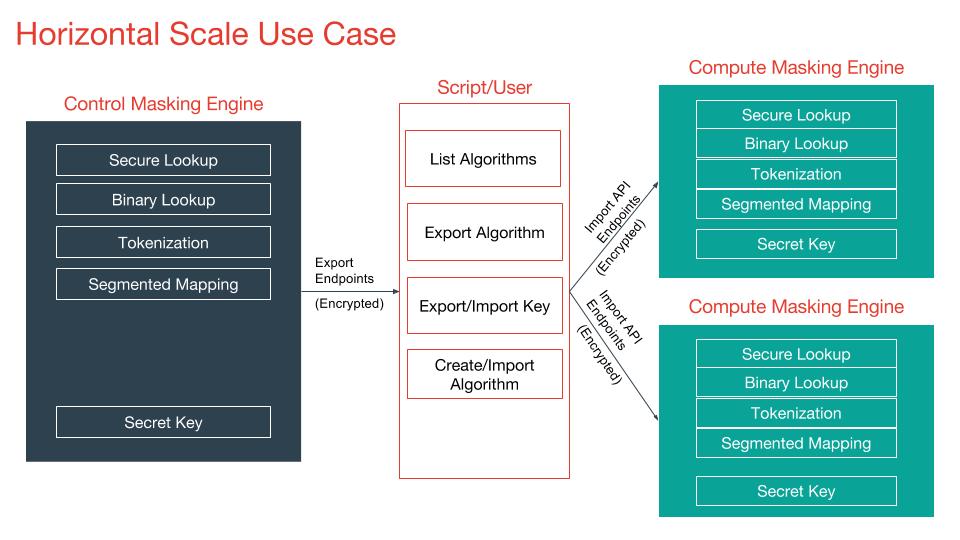 The second architecture addresses the desire to author algorithms on one engine, to test and certify them on another, and finally to deploy them to a production engine. Here, algorithms are authored on the first engine, labeled “Dev Engine” in the diagram below. When the developer is satisfied, the algorithms are exported from the Dev Engine and imported to the QA Engine where they can be tested and certified. Finally, they are exported from the QA engine and imported to the production engine. As seen in the diagram below, to ensure that your masked results in Production are secure it is advised that the Production engine uses a different key than the Dev or QA engines. 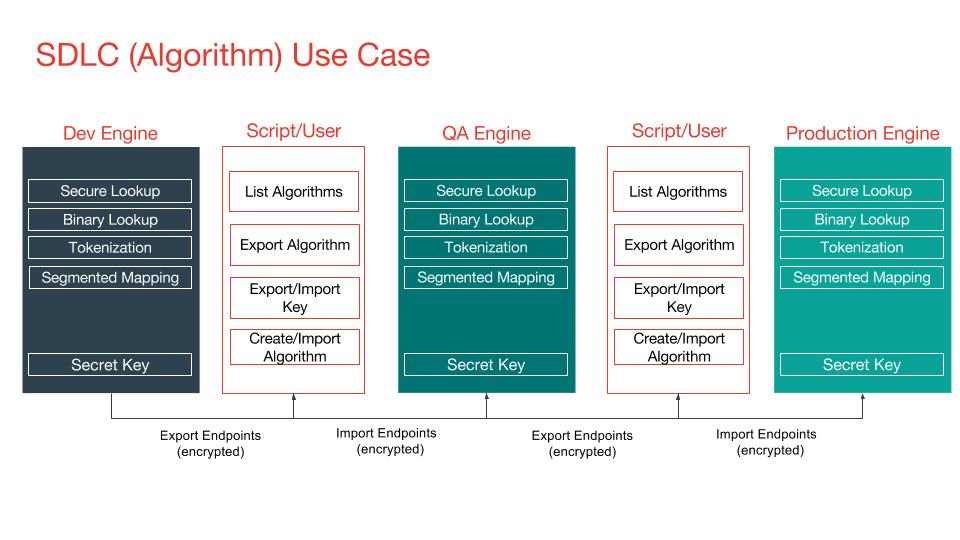 To maintain consistent masking results in the SDLC use case and continue producing the same masked output on a production engine:

Only users with masking admin privilege are able to export and import algorithms.