Tasks for the Windows Network Administrator

Be aware of the general connectivity requirements for connections into the Delphix Engine by your Delphix Administrators. A complete list of these requirements can be found on the page General Network and Connectivity Requirements.

This is the set of processes and services which enable the Delphix Engine to capture changes on the source SQL Server database and transform them into snapshots that are represented in the Delphix dSource.

Backups of the source database are written to a shared backup location. This shared folder can be owned by any user as long as SQL Server can write backups to it on the source, and the delphix_trgt Windows domain account can read it from the Staging Target host.

When a new database backup is written to the shared folder, then the Delphix Engine runs sqlcmd locally on the staging host. Backups are restored by a database in recovery mode within the SQL Server instance on the staging target host. The data files of this database copy in recovery mode are remote-mounted via iSCSI to files based on the DVE. The changes that result from restoring each backup to this database builds a new snapshot within the Delphix dSource.

As shown below by the Source or Staging Sub-system diagram, either (or both) the staging target host or the source database host employ the Server Message Block (SMB) service (port 445) for remote mounting of the shared folder. The staging target host employs the iSCSI service (port 3260) to remote-mount database files located on the Delphix Engine. The Delphix Engine communicates to the Delphix Connector service (default port 9100) and communicates to the SQL Server instance within the source database host using JDBC (default port 1433). Additionally, because the Staging Target Host is also acting as the Connector Host here, JDBC (port 1433) must be opened between the Staging Target Host and Source Database host for source database discovery. For a full list of port requirements, please view Network Access Requirements for SQL Server. 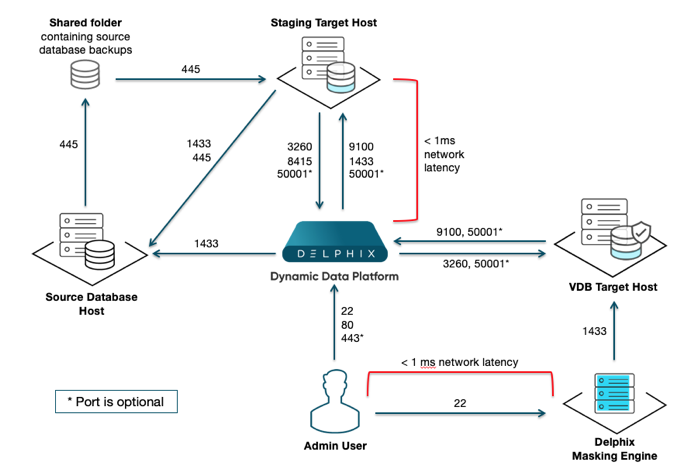 As a final note, the open-source iPerf3 package is embedded within both the Delphix Engine and the Delphix Connector software toolkit installed on any target host (including staging targets). iPerf3 is used for network throughput measurement between the Delphix Engine and the staging target host, if port 50001 is open in both directions between those nodes. If port 50001 is blocked or unavailable, another port can be selected for the test.

Recommended network latency between the Delphix Engine and the staging target host is less than 1 millisecond, which is a common recommendation for network-attached storage (NAS). This is due to the fact that any I/O that the SQL Server instance initiates becomes network traffic to the Delphix Engine, so low network latency is important for optimal database performance.

This is the architecture, consisting of a Delphix Engine and one or more target hosts, that allows Delphix to provision, refresh, and restore virtual databases (VDBs) from a dSource or other VDBs. 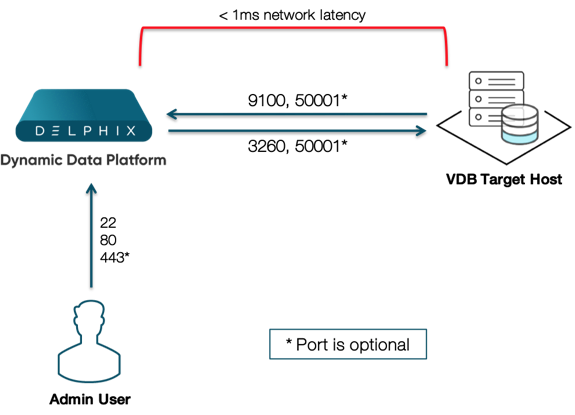 This section is only required is Delphix Masking is in use. As depicted in the Masking Sub-system diagram below, this is the set of processes and services which enable the Delphix Masking Engine to mask and anonymize VDBs or physical databases. To accomplish this, the Admin user needs the ability to connect to the DME using both SSH (port 22) and HTTP. The DME communicates with the target database on the SQL Server instance using JDBC (default port 1433).

Network latency requirements between the Delphix Masking Engine and Target Host are dependent on the volume of data to be masked, and the required speed to complete masking. Work with your Masking Administrator and Delphix Administrator to determine the appropriate latency for this connection.

You should also make intrusion detection systems (IDSs) permissive to the Delphix Engine deployment. Make IDSs aware of the anticipated high volumes of data being read from your shared backup location by the Staging Target host.

Export Tasks for the Windows Network Administrator to PDF