This topic describes components of the Delphix deployment architecture.

Delphix operates in a virtual environment with several core systems working in concert, each with its own set of capabilities. Understanding this architecture is critical in evaluating how solutions can be applied across the components, and the tradeoffs involved.

This diagram illustrates Delphix’s recommended best practices for deploying the Delphix Engine in a VMware environment: 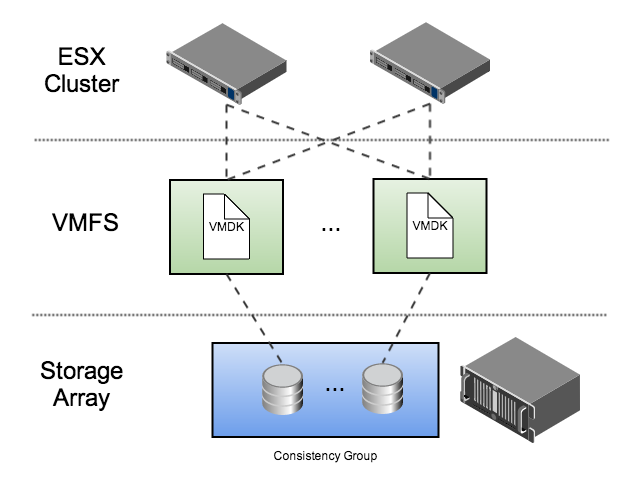 This architecture is designed to isolate I/O traffic to individual LUNs while using the most commonly deployed VMware components. In this example each VMDK file is placed in a separate VMFS volume. Each volume is exported to every node in the ESX cluster, allowing the Delphix Engine to run on any physical host in the cluster.

Across the recommended deployment architecture there are three key components in play: Delphix Engine, VMware, and storage. Each of these provides different failure handling capabilities, which can be roughly grouped into the following areas.

Clustering provides a standby server that can take over in the event of failure. A given clustering solution may or may not provide high availability guarantees, though all provide failover capabilities, provided that an identical passive system is available.

Snapshots preserve a point-in-time copy of data that can be used later for rollback or to create writable copies. Creating a snapshot is typically low cost in terms of space and time. Because they use the storage allocated to the array, snapshots restore quickly, but they do not protect against failures of the array.

Data replication works by sending a series of updates from one system to another in order to recreate the same data remotely. This stream can be synchronous, but due to performance considerations is typically asynchronous, where some data loss is acceptable. Replication has many of the same benefits of backup, in that the data is transferred to a different fault domain, but has superior recovery time given that the data is maintained within an online system. The main drawback of replication is that the data is always current - any logical data error in the primary system is also propagated to the remote target. The impact of such a failure is less when replication is combined with snapshots, as is often the case with continuous data protection (CDP) solutions.

Like snapshots, backup technologies preserve a point-in-time copy of a storage dataset, but then move that copy to offline storage. Depending on the system, both full and incremental backups may be supported, and the backup images may or may not be consistent. Backup has the advantage that the data itself is stored outside the original fault domain, but comes at high cost in terms of complexity, additional infrastructure, and recovery time.