On this screen, you can browse the contents of replicas, as well as failover or delete individual replicas. As described in the Replication Overview topic, databases (dSouces and VDBs) and environments are included within the replica.

Deleting or Failing over a Replica

Deleting or failing over a replica will sever any link with the replication source. Subsequent incremental updates will fail, requiring the source to re-establish replication. Failover should only be triggered when no further updates from the source are possible, as in a disaster scenario.

Multiple replicas can exist on the system at the same time. Active objects can exist in the system alongside replicas without interfering with replication updates. You can also use VDBs and dSources within a replica as a source when provisioning. For more information, see Provisioning from Replicated Data Sources or VDBs .

To activate the objects in a replica, you must first fail over the replica. This will sever replication and move the objects to the live system, where they can be manipulated in the same fashion as other objects on the system.

Objects that are failing over can conflict with objects in the live system. One reason for conflicts is identical names. For example, Groups will conflict if the failing over Group has the same name as a Group in the live system, as will most other objects including Environments, dSources, and VDBs. By default, active objects with conflicting names will cause an error at the time of failover. The error message will indicate which object(s) have conflicting names.

For all other object types, because the replica objects are read-only, you must rename the active objects before the failover operation can complete successfully.

Given that conflicting names prevent failover from succeeding, best practices in a disaster recovery situation are to leave the target system completely passive with no active objects until the time that failover is required.

Due to the potential for plugin version incompatibilities, if any of your replicated objects are plugin-based, we highly recommend that you leave the target system completely passive with no active objects until the time that failover is required. For more information, see the Delphix Engine Plugin Management page.

Once a replica is failed over, the objects are active but will be automatically disabled.

As of 6.0.5.0, the Automatic Conflict Resolution option will be chosen by default. 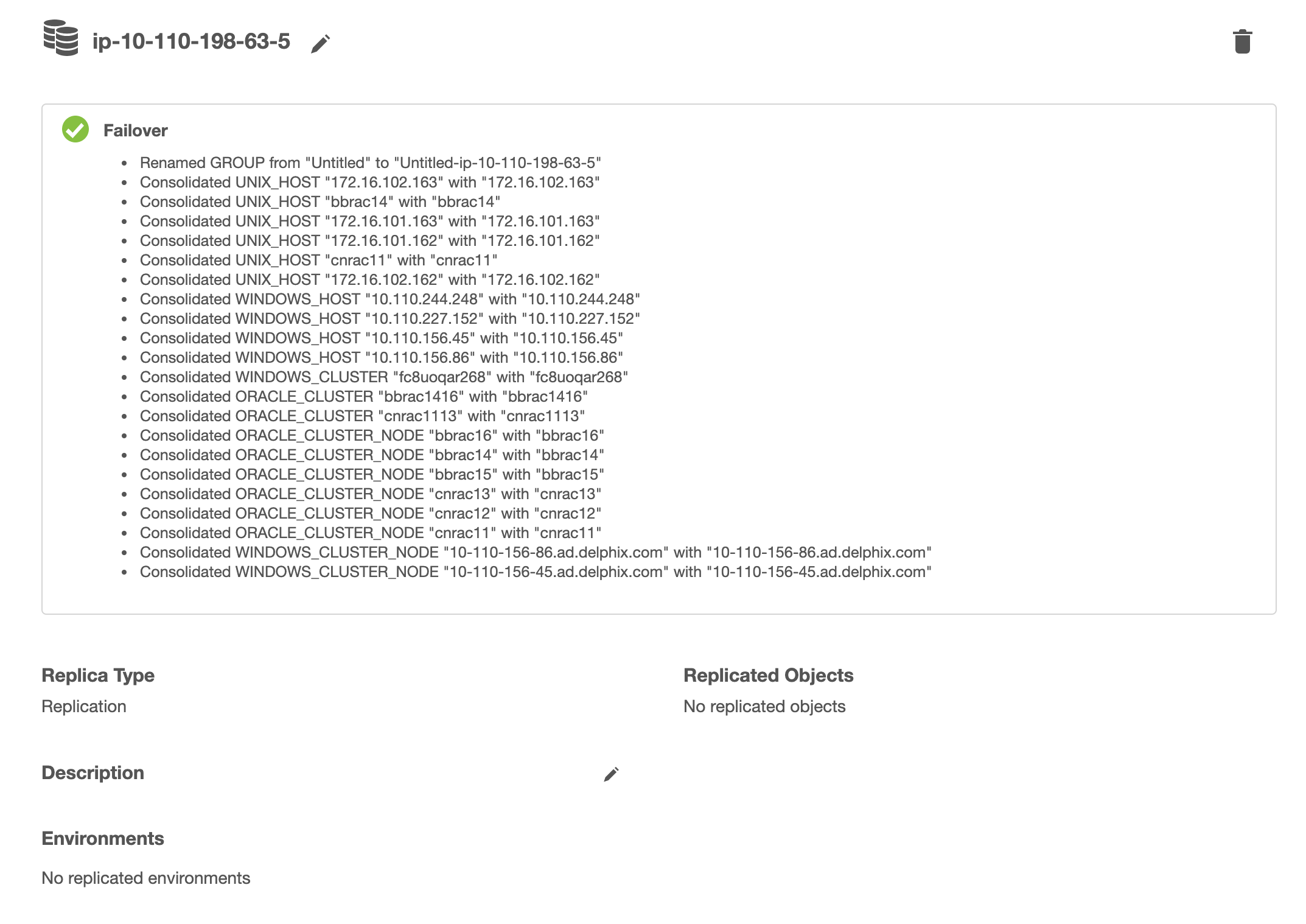 Automatic conflict resolution is not supported for objects like dSources and VDBs.

Objects may refer to states (IP addresses, mount paths, etc) that differ between the source and target system. Because of this, all databases and objects within a replica automatically start in the disabled state after a failover. This allows the administrator to alter configuration prior to enabling databases and environments, without the system inadvertently connecting to invalid systems.

After failover is complete, you must explicitly enable all dSources, VDBs, and environments. If you need to change any configuration for the target environment, you can do so prior to enabling the objects. In the event that a failing-over environment is consolidated with a live system environment, it must be refreshed before all of it's databases can be used.

Export Replicas and Failover to PDF