Refreshing and Rewinding a TDE-enabled vPDB

Just like a non-TDE-enabled vPDB, a TDE-enabled vPDB can be refreshed from the dSource or rewound to a previous snapshot or point in time.  In each case, no additional manual steps or input from the user is required.  The first step of a refresh or rewind operation is to disable the existing vPDB, which will result in a new keyfile exported to the artifact directory.  The appropriate snapshot files are then mounted for the auxiliary database so that it can be recovered and brought to a consistent state.  Since the vPDB is TDE-enabled, a keystore is needed for the recover operation.  For a refresh, the Delphix Engine will use the parent keystore, and for a rewind, the Delphix Engine will use the target keystore, as shown below. 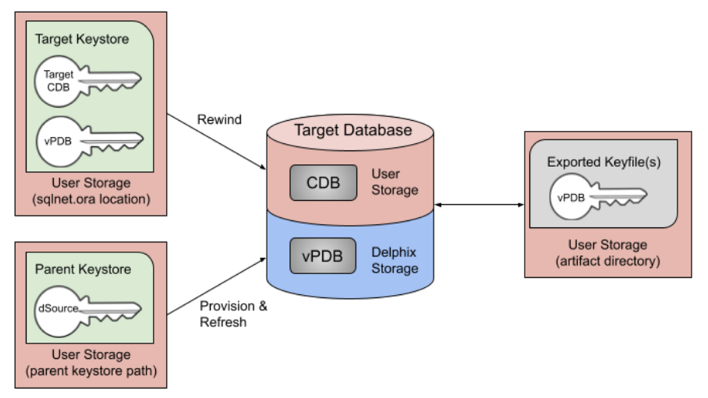 There are two potential places for keys to be rotated in a vPDB environment:

In either scenario, the keystore used for recovery will contain the current and all prior keys used to encrypt the datafiles and archive logs, for both the vPDB and CDB used in the auxiliary container.

During the provisioning process of a TDE-enabled vPDB, Delphix generates a unique encryption key for the vPDB. This unique key is not associated with the parent keystore to ensure that no keys from the parent are imported by the target. During refresh and rewind operations, Delphix reuses that key after recovery has finished. It is possible to customize the key that is used by updating the tdeKeyIdentifier parameter of the source via the CLI. If a valid key_id is entered for a key that is already present in the keystore, that key will be used as the active encryption key for the vPDB at the end of refresh/rewind. If the field is unset, Delphix will generate a new encryption key for the vPDB to be used from that point onward. See the CLI steps for Locating and Updating the Value of tdeEncryptionKey.

Export Refreshing and Rewinding a TDE-enabled vPDB to PDF