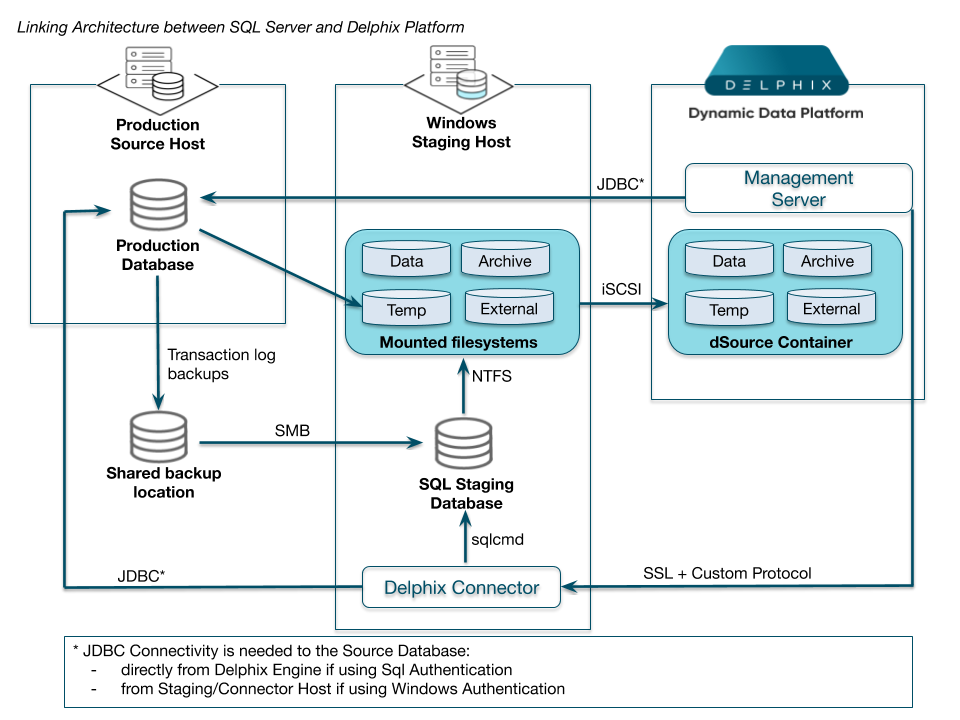 This block diagram shows the host architecture when creating SQL Server Environments in the Delphix Engine. On the left, the Source Host (in this example a Production Database Server) creates backups to a shared backup location. The Delphix Engine (far right), continuously monitors the source database to determine when new backups are available. When a backup is available, the Delphix Engine will contact the Windows Staging host (center) via the Delphix Connector service. The Staging host will read the backups from the shared backup location and recover them through a Staging Database that is automatically set up on Delphix iSCSI storage. Once recovery is complete, the backup data is incorporated into the Delphix dSource as a new snapshot card, and is available for use. 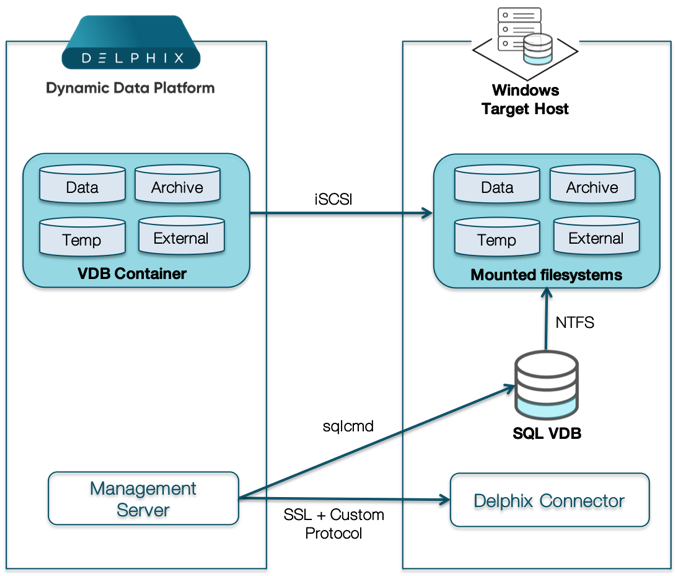 This block diagram shows how Delphix provisions VDBs to a Target Environment. The Delphix Engine (left) creates a set of virtual files from a snapshot that becomes the VDB container. These files are presented to the Target host (right) via iSCSI. Delphix calls the Delphix Connector on the Target and initiates the creation of a new database using the Virtual files. Once complete, the Virtual Database is brought online and made available for use.

The Delphix Connector and Environment Setup

The Delphix Connector is a Windows service that enables the communication between the Delphix Engine and the Windows target environment where it is installed.

This target machine can serve three purposes in a Delphix Engine deployment. It can:

When you later provision a VDB, you can specify any environment as a target, including the environment that contains the staging database. However, for best performance, we recommend that you choose a different target environment. The only requirements for the target are:

Each of the clients that run from the client-side toolkit generates its own logs. Each client generates 4 different log files, one for each level of logging: info, trace, debug, and error. Each level of logging is restricted to a maximum of 10 logfiles, and these logfiles are capped at 10MB each. Therefore, the Delphix Engine will consume a maximum of 400MB per client-side application. On the source server, there are currently two commonly run client-side applications, SnapSyncClient and the Delphix Connector.

V2P also generates its own logs, so if you intend to V2P to the source, you should account for an additional 400MB in your upper bound.

Thus, the max amount of growth for the toolkit from logging is 800MB without V2P (or 1.2GB with V2P).

Linking additional dSources does not impact the size of the toolkit on production, aside from the log messages generated during linking, which is included in the calculation above.

On the target server, unlike the source server, there would be only one client – the Delphix Connector, which would occupy around 400 MB maximum storage space. In addition, the Delphix Engine pushes new scripts each time you provision a VDB. This requires < 1MB space.

Export Overview of Setting Up SQL Server Environments to PDF