Multiple Device Removal in the Delphix Engine 6.0.12.0 and higher version introduces a breaking kernel module change that requires a reboot to load the new module. Therefore, a deferred reboot engine upgrade operation will be unable to remove devices until a reboot is performed.

This feature is only compatible with Delphix Engine Releases 5.0.4 and later.

DO NOT REMOVE A CONFIGURED STORAGE DEVICE

Getting the UUID of an RDM Disk from VMware via the vSphere GUI.

In the event that the disk serial number displayed in Delphix does not match the UUID in VMware, the Delphix Engine must be powered off and back on in order to make VMware provide the correct values to the guest operating system (Delphix). This has been necessary when using vmkfstools with setuuid. When forcing the guest OS to re-read the SCSI sense data for the device, VMWare still provides the original values. Even after a simple reboot VMWare still provides the previous UUID values. It was not until the VM was explicitly powered off and back on did VMWare present the new UUID values to the guest. After which the UUIDs matched between the vmkfstools getuuid command and the CLI output. 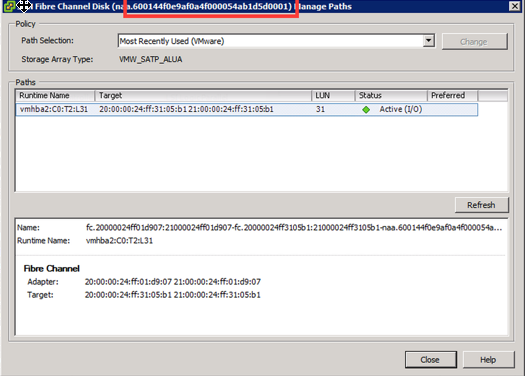